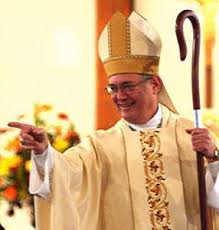 I find it astonishing that the same people who profess such concern over
the impact of civil marriage on religion are indifferent to imposing their
religion on civil law.

What part of the Establishment Clause do these idiots not get? Seriously. For at least ten years, the Catholic Church has invested a vast amount of money and energy on thwarting marriage equality. They have yet to pose a rational argument that marriage equality has some effect on “traditional” marriage. Couldn’t all this money and energy be better served on the under-educated, under-nourished and homeless?

We will continue to vigorously oppose efforts to redefine the
institution of marriage in Rhode Island. Nevertheless, the legislation
introduced by Senator Ciccone presents an eminently reasonable approach
to this divisive issue. It advances the discussion in a positive and
democratic way, while at the same time safeguarding the rights of all
parties. The citizens of Rhode Island have a right to vote on this
crucial issue.

This guy might be important to his church. He has all of the trappings of a 16th century aristocrat including the absurdity of a coat of arms. Beneath all that expensive silk are probably Ferragamo loafers. But he means absolutely nothing to me and the vast majority of US citizens. His entitlement is the same as any other citizen. Notice that he doesn’t even mention the church in his statement. He is speaking for his church but wants to pass this off as something of secular concern. It’s dishonest per se.

The citizens of Rhode Island do not have a right to vote on civil rights. We have elected representatives who are supposed to be better informed and partial only to the facts. That is what the Founding Fathers had in mind with a republican form of government. What this bishop wants to do is to champion a campaign a la Maine’s Question 1 in 2009. This will provide these people an opportunity to trot out the usual homophobia via Frank Schubert. All the while, they will profess their love for “people who experience same-sex attraction.”