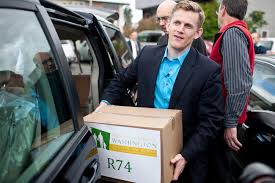 Discrimination is not a legitimate expression of “religious freedom!”Yet, Joseph Backholm, head of Family Policy Institute of Washington seems to think that it’s a good idea to allow discrimination based on religious beliefs. Aside from the insult to the Establishment Clause that could mean, for example, that we could see “restricted” hotels again. How about a revival of segregation? Those were both based on so-called “religious freedom.”

This bill is a reaction to the misadventures of Arlene’s Flowers which, by the way, now has a legal defense fund. Some of Backholm’s reasoning (by way of email) follows (emphasis added):

The bill amends the state’s non-discrimination statute and states that it cannot
force someone to provide services, if doing so would violate their conscience or
strongly held religious convictions. While this would apply to wedding ceremonies,
including polygamous and/or same-sex wedding ceremonies, it would also apply generally
to works of art, conventions, conferences, parties, or published messages like artwork,
literature, or website design that could include a message that a business or individual
would not be comfortable lending their services to.

What this idiot is trying to do is to exclude gay people from all aspects of public life at the arbitrary discretion of some Christian. Students of history know that this amounts to “a law to protect Christian honor.” But it gets worse:

This bill would help distinguish between discrimination based on characteristics
like race, religion, or sexual orientation and a decision not to provide services
for activities and/or messages that an individual or business is not supportive
of. A policy that says you don’t serve Christians or Muslims is discrimination
based on religion. Declining the chance to be part of a Ramadan festival or Easter
Service at the request of a Muslim or Christian may not be.

Really? That is blatant discrimination. Moreover, it creates a form of legal discrimination that is arbitrary and subjective. “I won’t sell flowers to the Jews because they are all going to hell.” Or; “God intended for the races to be separate. I refuse to allow my catering hall to be used for an interracial marriage.” Who defines legitimate religious objections?

The Attorney General’s lawsuit fails to recognize this difference. Arlene’s Flowers
had sold flowers to the gay couple involved in this lawsuit for years and even employed
homosexuals. The job of providing floral services for a wedding ceremony, however,
is different than simply selling flowers to a customer because it involves going
to the location, creating arrangements , and generally being part of the event.
This particular business owner was not comfortable with that.

The difference that Backholm seeks to define in law is simple. He want to essentially remove “sexual orientation” from nondiscrimination ordinances while retaining “religion.”

The question Washington citizens need to consider is whether there is still room
in our civil society for people to make that decision. The only alternative is
to force people to choose between their livelihood and their conscience.

The very purpose of nondiscrimination ordinances is to prevent individual determinations of who they will serve and who they won’t.