Judy Shepard to speak at Brown Theatre in Louisville 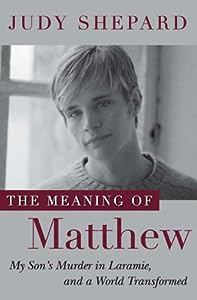 Judy Shepard, mother of Matthew Shepard, the Laramie, Wyoming, college student whose 1998 murder inspired the federal hate-crime prevention act of 2009, will speak in Louisville for the first time at 3:30pm, Wednesday, October 23, at the Brown Theatre on Broadway Avenue. The event is free and open to the public. Tickets can be reserved in advance by contacting byoderg@b-f.com, and will also be available at the door on the day of the event.

Shepard will discuss her son’s legacy and 2009 memoir, “The Meaning of Matthew: My Son’s Murder in Laramie and a World Transformed,” a moving, intimate look at how her entire life and fight for equal rights changed when her son was killed. Speaking from a mother’s perspective, Shepard has made the prevention of hate crimes the focus of her efforts, and urges her audiences to make their schools and communities safe for everyone, regardless of their race, sex, religion, or gender identity and/or expression. Carmichael’s Bookstore will have signed copies of Ms. Shepard’s book available for purchase before and following the free, public talk.

As an aside, I am frequently surprised by things that don’t comport with my own preconceptions. It would never dawn on me that the makers of Jack Daniels would have an LGBTA Employee Resource Group.