Johnny Weir is a ‘fabulous’ disappointment

Johnny Weir has been the object of much adoration by the LGBT “establishment.” In the fall of 2010, for example, the Human Rights Campaign honored Weir with its Visibility Award.

On July 10 of this year Weir told CBS:

In Russia, just the sheer fact that you could be gay, you can get arrested, fined, and it’s a terrible thing to even think of … If it takes me getting arrested for people to pay
attention and for people to lobby against this law, then I’m willing to
take it. Like anyone, I’m scared to be arrested. But I’m also not afraid of being arrested.

I recall thinking “maybe this guy is not such a self-absorbed diva after all.” In September, Weir announced that he would not be competing in Sochi. On October 23 NBC Sports announced that Weir would serve as an analyst for their figure skating coverage at the Olympics. On the same day (October 23) Weir was interviewed by the New York Times. Shortly after telling the Times “I’m the same as always — fabulous!” Weir said this:

I risk jail time just going there, but the Olympics are not the place to make a political statement. I’m not a politician and I don’t really talk about politics. You don’t have to agree with the politics, but you have to respect the culture of a country you are visiting … It’s pretty obvious that I’ve been gay my whole life. I don’t need to break any laws or wear a rainbow pin to show people that I support gay rights. 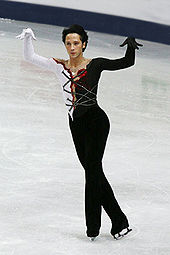 What sacrifice! Johnny Weir is so courageous just to go to Russia in order to share his fabulousness with all of us. NBC Sports must be forcing the poor dear to take their money. In between these two statements Weir wrote an Op-Ed in GLAAD’s space about how important it was for us not to boycott the Olympics. After all Weir just had to skate — not for him, of course, but for the sport and for us.

Turns out that Weir really is a vapid, stereotypical, self-absorbed prima donna after all. Perhaps HRC and GLAAD can find better, more substantive, role models.