Doug Mainwaring has a new gig with Witherspoon (of course) 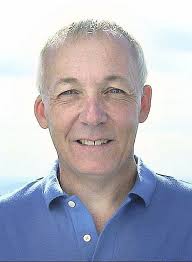 Last March I wrote “Doug Mainwaring, is a Tea Partier and openly gay man. He is also married (to a woman) and has children. Apparently, he does not engage in gay sex due to his conservative Catholic convictions. He is proud to say, ‘I’m gay and I oppose same-sex marriage.’ Well good for him. At least he admits that there is such a thing as a gay person. That’s progress.”

Mainwaring was National Organization for Marriage’s little gay puppy dog; Their house faggot. He was part of the marriage discrimination road show, traveling from Maryland to Minnesota to Illinois; testifying before legislative committees in an effort to thwart marriage equality. NOM yanked the leash and Mainwaring obeyed. Mainwaring found “the homosexual lifestyle®” so tedious and unsatisfying that he has decided to play house with his wife. It seems that Mainwaring lied and entered into a sham marriage, left the marriage to play gay and has now returned.

According to Withersoon Institute’s rather pretentious blog,

Doug Mainwaring is director of CanaVox, a project of the Witherspoon Institute.

Canavox has a domain name (canavox.org) owned by Witherspoon and parked at GoDaddy. The domain was created last August. We don’t know what CanaVox is, or will be. A search of CanaVox on Witherspoon’s site yields no results. However, we know a bit more about Mainwaring because he has written a new piece for the same (rather pretentious, pseudo-intellectual blog).

Mainwaring has chosen to take on Jonathan Rauch, a senior fellow at the Brookings Institute. Rauch is a Yale graduate who is well known for his writing. He is a very accomplished intellectual with expertise in economics, political science and governance. Rauch has been a proponent of marriage equality at least ten years. He also serves as VP of the Independent Gay Forum. Mainwaring on the other hand is a Tea Party crackpot who may not be college educated. Mainwaring is way out of his depth.

Mainwaring’s polemic, Jonathan Rauch’s Denial, is a rather banal treatise. Because Mainwaring chooses to live a lie, we are treated to paragraphs like this:

LGBT activists often present this Hobson’s Choice
to those who have experienced same-sex attraction, especially young
people: “Either jump out of the closet, join the celebration, make being
gay or lesbian the dominant characteristic of your life and the sole
foundation of your identity, and join the same-sex marriage lobby—or
remain ‘closeted,’ deny yourself, choose a false identity, become
depressed, and risk suicide.”

It’s a Gish gallop of BS. We are back to the Catholic ideal of “same-sex-attraction” which, they will tell you, is similar to people who are predisposed to abusing alcohol. Furthermore there’s that  “experienced” (past tense). Mainwaring is so utterly clever you know.

I am certainly not defined by my sexual orientation. Nobody is telling young people to make gay a dominant characteristic of their life. It’s certainly not the sole foundation of anyone’s identity. Where on earth does Mainwaring get these notions from? I cannot decide if Mainwaring is simplistically intellectually dishonest or one of the most shallow creatures on the planet. Gay people are usually defined by what they do. That can include their vocation, avocations and, perhaps, their status as a husband/wife or as a parent.

Furthermore, Mainwaring chooses to ignore the many different forms of open sexuality. A young man or woman might be open to a counselor or therapist while being in the closet to all others. Increasingly, gay children are open to their friends before they are comfortable telling their parents. Moreover, being in the closet and being in self-denial are two different things.

If there is certitude it is around the ideas that young gay people aren’t broken or inferior. The should not be subjected (or subject themselves) to efforts to alter their sexual orientation.

Mainwaring is entitled to live any way that he wants. His fucked up pretend marriage to his wife is his business. However, he is, perhaps, one of the last people who should be advising young gay people about anything. Since this dishonesty is at the core of the entire piece, the entire cumbersome essay falls in on itself. I’ll indulge in a bit more of this nonsense:

Since I’ve entered the national debate on same-sex marriage,
many men and women have come forward to tell me that they too have
chosen a path that is anathema to LGBT activists and ultra-leftist
political groups. Many find great joy and fulfillment in heterosexual
marriage. Many also find joy in close same-sex relationships that do not
become sexual and are never meant to be carnal.

Let’s have a list Doug. How many is many. I doubt that there are a whole lot of gay people who find fulfillment in sham marriages that they never should have entered into. Two gay people who don’t have sex with each other are friends. Life partners including husbands and wives have sex with each other. Mainwaring goes on to comically prove my point:

Whereas LGBT activists seek to limit the options of the same-sex attracted, new voices are now appearing on the scene to open wide the door to diverse choices. Voice(s) of Hope,
a website created by same-sex-attracted members of the Church of Latter
Day Saints, is one such effort. In short videos, often seated next to
their (opposite-sex) spouses, same-sex-attracted men and women testify
to the choices—choices that go against the script the LGBT lobby
promotes— that have given them profound joy: accepting themselves, but
directing their love toward different ends.

We are limiting options? This is the gay guy who has actively campaigned against giving gay people the option to marry. He doesn’t do so because of an intellectual assessment. Mainwaring does so because of the disapproval of the Church. Here, Mainwaring’s point of reference is devout Mormons who, in my opinion, lead miserable dishonest lives. Nevertheless, if that’s what they want to do, who am I to say that they shouldn’t?

The simple fact is that Witherspoon is an Opus Dei affiliated organization. For his part, Mainwaring is, first and foremost, a conservative Catholic literalist who needs to be obedient to the teachings of his Church. His mission is to limit the options of gay people with respect to sexual relationships and marriage equality. He has worked hard to deprive gay people of the options that the overwhelming majority seek. Contrary to Mainwaring’s assertions, we don’t tell anyone how to live their lives. He and his religion, on the other hand, exist solely to pass judgment.