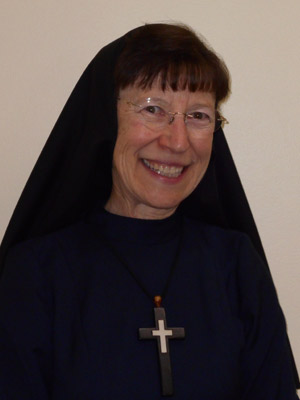 I hate to pick on a nun but I understand that Sister Marysia Weber, a board certified psychiatrist, has been appearing at anti-LGBT seminars alongside Dr. Paul Hruz to disparage gender transitioning. Doing so indirectly disparages transgender kids who are especially vulnerable. Here is what I know about Sister Marysia:

According to the website of the St. Louis Guild, a group within the Catholic Medical Association:

Her primary work includes assessing and treating seminary candidates, priests and religious. She has also offered numerous formation workshops on a variety of formation issues for U.S. Bishops, seminary formators and vocation directors.

Formators? Oh well. Missing from all of this is any experience treating gender nonconforming youth, transgender people or people with gender dysphoria. That is good news considering the damage that she could do.

Weber has a D.O. (doctor of osteopathy) in contrast to an M.D. That often means that she attended an inferior medical school. Personally I see a fine neurologist who has a D.O. However, according to the State of Michigan, Weber was placed on probation in 2013 for failing to meet continuing education requirements. The probation was satisfied several months later. At this time, according to Michigan, Weber is unlicensed to practice medicine. Her license lapsed in 2015. Did she allow this to happen to avoid further continuing education requirements? Even if that is not the case, this is a reflection of priorities with the caveat that state license verification systems are not always accurate.

If you want to verify this on your own, a name search doesn’t work. You need to select her detail from a list of medical licensees in Alma, MI (sometimes my personality disorder works in odd and beneficial ways).

The good sister might be a lovely person but she is not an expert on human sexuality. She should not be trotted out as an expert. Furthermore, she has an obvious conflict that must be very difficult for her to resolve. She is primarily guided by her belief system which is based on faith. She is also a scientific practitioner and science is based on evidence. If, as I have been told, she is claiming that dysphoric kids should be restrained from transitioning then she is providing some very dangerous advice based on her religious beliefs.

Yet she is being trotted out, along with folks like Hruz. The reason that they are doing this is an attempt to convince people that the teachings of the Catholic Church offer the best approach to gender dysphoria. Conservative Catholics insist that gender dysphoria should be treated with talk therapy, an approach that is not supported by peer-reviewed research.

However scripture does not accept the incongruence of gender and natal sex. In fact the whole concept of gender is dismissed as moonbeam fantasy. Transgender people are deemed to be cult-like adherents to a strange and evil ideology. Ryan T. Anderson even wrote a book on transgender people despite the fact that he is entirely lacking in the qualifications to do so.

These people are irresponsible. For the supposed glory of their god they are spreading misery and suffering. They put vulnerable kids at risk and create delays in real treatment. In some instances lost time cannot be recaptured.

For some people, a nun who practices medicine is the zenith of credibility. I hope that parents have the good common sense to seek out clinicians who are experts in this field and who are associated with prominent research hospitals.