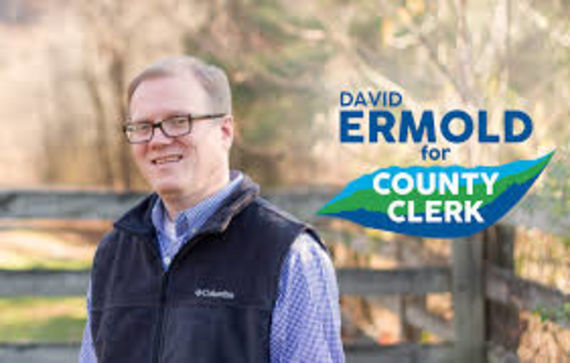 David Ermold is a courageous guy. He demanded a marriage license from Kim Davis. More recently Ermold, an English teacher, sought to oppose Davis in November in her quest for another term as Rowan County Clerk.

Ermold’s sexual orientation was never a campaign issue. Democrats advanced a candidate, Elwood Caudill Jr., who they thought had the best potential to oust Davis (a former Democrat) and then serve as an effective county clerk. Caudill is a 20-year employee of the county’s property valuation office and a fourth-generation Rowan County resident. He received 54% of the vote to Ermold’s 25%.

Kim Davis, you may recall, essentially inherited the office from her mother who had been county clerk. She in turn employs her son in the office and presumably expects him to eventually succeed her. Hopefully Mr. Caudill will ruin her plans. Democrats outnumber Republicans in the county by about two to one.

Of course hate group leader Mad Mat Staver had to weigh in. In an email he sent to the Courier Journal:

The people of Rowan County want someone who will serve them as clerk, not someone whose only reason for running is spite and vengeance. David Ermold never had local support and had no clue what the clerk does on a daily basis

It just demonstrates what Staver thinks of gay people. Ermold was probably neither spiteful nor seeking vengeance. Rather, he saw an opportunity to replace a bigot with someone who will serve and respect all of the people of Rowan County. Davis is a distraction and an embarrassment. Moreover, Staver has no way whatsoever of knowing what Mr. Ermold knows about the duties of a county clerk.

Mr. Staver, on the other hand was the losing attorney in Kim Davis’ case which is why the state had to pay the ACLU $233 thousand in legal fees. Staver has been unsuccessfully fighting his loss through various appeals.

Following the ruling in Obergefell v. Hodges, Davis spent five days in the hoosegow for defying a court order to issue marriage licenses to same-sex couples. She was released only when a judge ordered her deputies to provide the licenses without her approval.

Davis initially claimed that her office would never issue a license to a gay couple. That evolved to her objection being that her name was on the license. Doing so enabled her to escape her situation when the legislature changed the license form. When deputies did issue marriage licenses, Mad Mat claimed that they were invalid in spite of the fact that they were issued pursuant to the orders of a federal judge. Mad Mat Staver is … What can I say? Impaired?