Mike Huckabee has endorsed Randy Boyd for governor of Tennessee (three other Republicans are competing for the nomination). If you view Boyd’s website it avoids religiosity and there is no mention anywhere of LGBT people. Boyd is pro-life but he states the position without any religious references.

Enter David Lane. David Lane is a creepy Republican operative who is promoting an American theocracy. To achieve this goal, Lane runs conferences designed to motivate conservative Christian pastors to run for public office. Lane’s finances are very murky. His sponsors have washed their funds through American Family Association, an LGBT hate group. Lane, himself, is extremely hostile to LGBT people.

One reason for using AFA as a conduit is to make political contributions tax deductible which is prohibited. Lane’s American Renewal Project is most certainly a political organization and it is not recognized by the IRS as tax-exempt.

Somebody’s values are going to reign supreme, our goal is to bring Biblical values to the public square. God is in the business of resurrection. We believe there’s going to be a spiritual resurrection in America.

Huckabee and Boyd together for Lane:

Lane has organized the Tennessee Renewal Project for a July 16 event limited to pastors and their wives. “Special guests” include Mike Huckabee, pseudo-historian David Barton and Randy Boyd.

If Mr. Boyd does not agree with Lane’s agenda then he would not be involved in this extremist event to promote the agenda. These are people who advocate “Christian Nation” mythology, Christian Supremacy and dominion theology (Christian governance based upon biblical law).

Is Tennessee that far to the fringe for Boyd to be a candidate for governor? Time will tell. 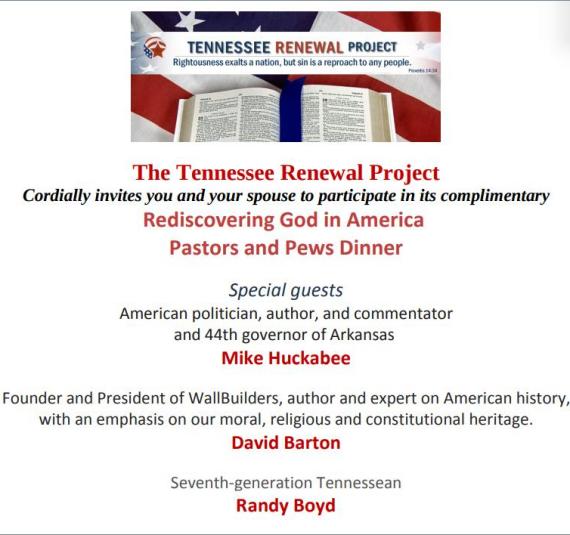