Speaking of grifters, there is the ever-present Brian S. Brown 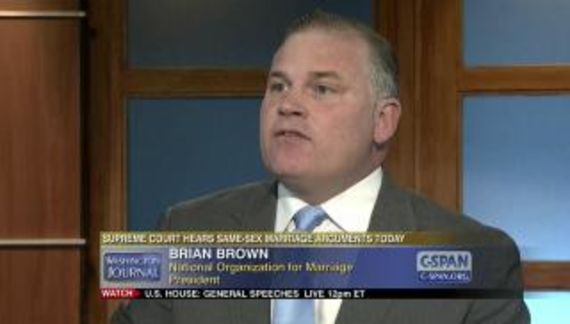 Thursday, National Organization for Marriage continues to mislead potential donors. I am in the process of attempting to reconcile NOM’s 2017 supposed “matching grants” with the 2017 tax return. It is going to take some time but matching grants are a scam. The money being donated is not contingent on the donations of others.

Brian S. Brown will say just about anything to raise money. Thursday’s missive is titled Don’t let us fail. I hate to be the one to break it to you Bri but NOM failed 3½ years ago with the ruling in Obergefell v. Hodges. It was inevitable after the Windsor ruling in 2013. Windsor eradicated NOM’s only victory, Prop 8. Before that, in 2012, gays ran the table at the ballot box.

Mr. Brown has a very short (and selective) memory:

I am very grateful to all those who have responded to my urgent pleas for assistance as NOM heads into the final days of the $50,000 matching gift challenge that has been made available to us. Though many people have responded, we are still thousands of dollars short …

Perhaps worse than the “matching gift challenge” BS is the attempt to justify contributions.

We’ve had a great year in 2018 with huge victories in the courts, including the US Supreme Court; with the Trump administration; in Congress and state legislatures; and at the ballot box. Unfortunately, our finances have fallen critically behind and unless we are able to receive the full $50,000 in matching funds at the end of the year, we will be in serious trouble. Please, don’t let NOM fail to make the goal. It’s crucial that we do so.

Was National Organization for Marriage responsible for any of that? Has NOM actually had a single success since Prop 8 in 2008? More than $60 million down the proverbial crapper. Nothing to show for it.

Mr. Brown could not organize a closet. However, when it comes to scamming other people’s money he is impressively proficient. Isn’t that true of most con artists? Eventually, the conned catch on.