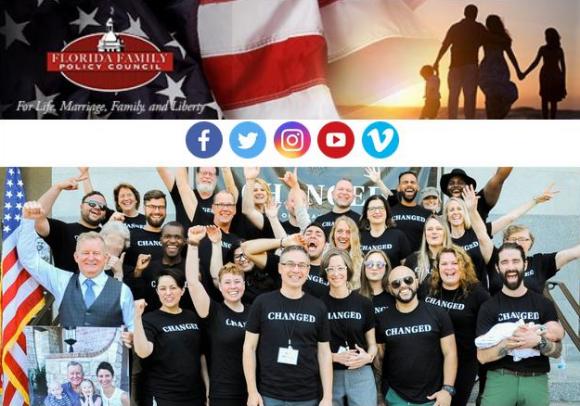 Hate Group Leader John Stemberger of Florida Family Policy Council is the choreographer of an inane “Freedom March” in Orlando on September 14. The above two images and social media spacer constitute the header of the email. The bottom picture is via Bethel Church in Redding, CA. The woman just right of center wearing classes is Elizabeth Woning who runs Bethel’s LGBT conversion business.

Mr. Stemberger, you will recall, was so offended that the Boy Scouts would allow openly gay boys to participate that he started a faith-based alternative, Trail Life USA (an assumed name of Youth Adventure Program, Inc.). Stemberger remains as the organization’s uncompensated president. His day job is as a half-assed Orlando lawyer. In his last appearance in federal court Stemberger represented a company that stiffed some poor schmuck out of overtime pay in 2004.

The current email is classic Stemberger but might be the product of Bethel Church’s PR machine:

The Freedom March is led by a diverse group of Christians who have been delivered from LGBTQ lifestyles. Their purpose is to connect, bridge, and equip. They accomplish their mission through connecting fellow overcomers, reaching out to the LGBTQ community in each city, and equipping the local church. They seek to bring the hope of deliverance to the LGBTQ community and point them to Christ! Freedom March is not about suppression. It’s about FREEDOM!

If these idiots want to reach out to the LGBTQ community in a meaningful way then the first thing to do is to stop referring to sexual orientation and gender identity as “lifestyles.” Doing so is an appeal to stereotype.

“Delivered” means gaining conservative Christian approval. An “overcomer” is someone who claims to be ex-gay or ex-trans and becomes “delivered.” LGBTQ people have nothing to overcome except stigma and prejudice which are amplified by this promotion.

The “hope” that they claim to offer is based on arrogance. There are plenty of LGBTQ people who are pious Christians. Many Christian churches, for example, sanctify same-sex marriages. “Freedom” means pretending that one’s sexuality is not subject to the disapproval of people like Mr. Stemberger. Real freedom is achieved by being who you are.

The truth is that there is no evidence that people can change their sexuality. There are a handful of people who claim to have done so. Yet is seems that they always have an economic interest in claiming to be ex-whatever. We used to joke that people claimed to be ex-gay until Wayne Besen caught them in a gay bar.

On a more personal note, having been ambushed, shot and seriously injured I truly resent their exploiting (and allowing others to exploit) a mass shooting where 49 people were murdered and another 50 injured. If these people want to be activists then they should work to take weapons out of the hands of people like the Pulse nightclub shooter. That would be something positive.

What these two are doing is negative. The claims that people can change their sexual orientation or gender identity are the work product of the religious right.

One is expected to RSVP this event on Florida Family Policy Council’s Facebook page. I have no idea why one would have to RSVP for a march.

No mention of Jeffrey McCall who is usually a promoter of these things. That halfwit might show up.

Stemberger and his organization are local organizers. Bethel Church is underwriting at least some of the expenses. I suspect that Ruiz and Colon are on Bethel’s payroll. The other participant is Fearless Identity, Inc., a 501(c)3. Fearless Identity consists of:

Their IRS ruling came less than four months after incorporation which often means that a CPA did the filing. These two would probably be bewildered by the process. If these two guys want to claim that they got religion, I say “mazel tov.” When they promote the idea that sexual orientation and gender identity can — and should be changed — I say… never mind I have been trying to clean up my act a bit.