Liberty Counsel, an anti-LGBTQ hate group, is once again selling useless fax services at tremendously inflated prices. The faxes are supposedly going to influence members of Congress with respect to their views on impeachment. In reality, members of Congress are only interested in the views of actual constituents who are eligible voters in their district.

According to the text:

I am tired of the fake witch hunt against President Trump. The U.S. House has spent years and tens of millions of my tax dollars trying to investigate our president and found absolutely no high crimes or misdemeanors.

In contrast, there are allegations into Speaker of the House Nancy Pelosi’s son, who became an executive of a gas industry company that did business in Ukraine after his mother led a congressional visit there in August of 2015. There are also allegations about Vice President Joe Biden’s son, who was granted a $50,000-per-month salary while his father was in the White House.

If the U.S. House is concerned about ethics violations and nepotism rather than just trying to punish President Trump, than I encourage you to investigate these allegations.

There exists a considerable body of evidence that Trump attempted to extort Ukraine by trading military assistance for interference in our presidential election. Chief of Staff Mulvaney admitted as much.

In addition to smearing Joe Biden, Trump and Giuliani wanted Ukraine to agree to say that the CrowdStrike fringe conspiracy theory was true. Trump’s abuse of power and obstruction of justice are not just impeachable offenses. These are crimes.

Because Pelosi Jr. did not work for NRGlab during the time in which the company is alleged to have done business in Ukraine, and because the product allegedly produced by NRGlab in Ukraine does not exist, we rank the claim that “Nancy Pelosi’s son is an executive at a gas company that did business in Ukraine” as “False.”

There does not exist a shred of evidence that Joe Biden or Hunter Biden did anything wrong.

Regarding the cost of the faxes: 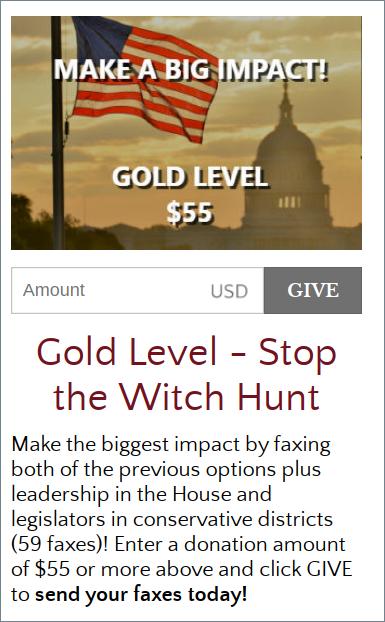 That works out to $.93 per page. HelloFax is about $.04 per page and there are probably less expensive services.

Bottom line: The hate group seeks to profit handsomely by misleading people into sending useless faxes at an exorbitant price. Sounds about right for Liberty Counsel. This is being done through Liberty Counsel Action which means that donations are not tax-deductible.